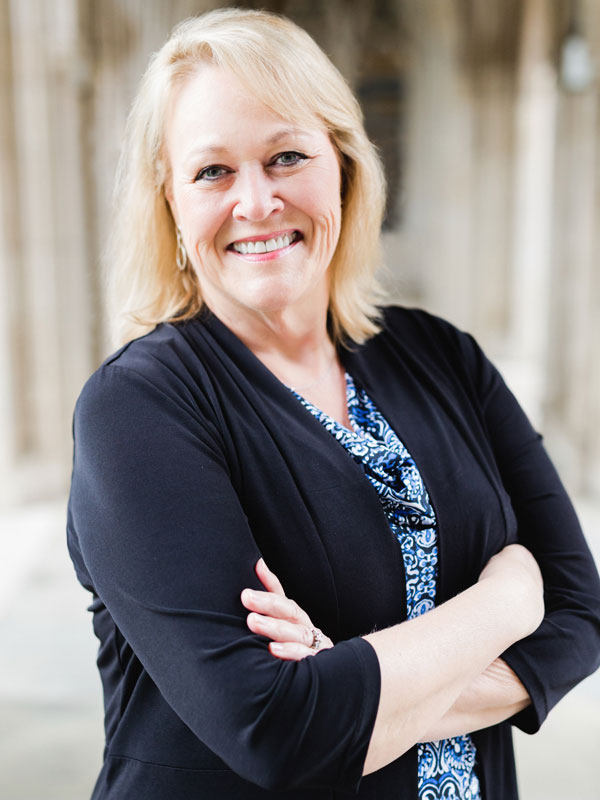 Rev. Susanne Priddy brings together the experience of the business world and the church, accentuating the fact that so much of Jesus’ ministry was lived out in the marketplace.

Susanne began her chamber career in her hometown at the Conway, S.C. Area Chamber of Commerce during summer break from college. After graduating from the University of South Carolina with a BA in Journalism and specialization in public relations in 1984, she served chambers of commerce in Myrtle Beach, S.C., and, in North Carolina, the South Brunswick Islands (Shallotte), Jacksonville, and Greenville.

Susanne earned the designation of Certified Chamber Executive (CCE) in 2001. In 2007, under her leadership, the Greenville-Pitt County Chamber of Commerce was recognized as one of the top three chambers of its size in the country by the American Chamber of Commerce Executives. In 2008, Susanne was named one of North Carolina’s Exceptional Women Leaders by NC Magazine. That same year, Susanne founded 21st Century Leadership, LLC and began serving chambers, businesses and churches for leadership, strategic planning and DiSC® training.

A lifelong learner, Susanne’s Master’s in Divinity from Duke was preceded by a Master of Arts in Leadership from Bellevue University (2008) and a wealth of chamber-related professional education through organizations such as ACCE, CACCE, the Center for Creative Leadership, and the U.S. Chamber.She is a graduate of the U.S. Chamber of Commerce Institutes for Organization Management, for which she subsequently served as a faculty member at several sites.

She is a former North Carolina Chamber Executive of the Year as well as a recipient of the Business/Professional Distinguished Woman’s Award in Onslow County. She has received awards for her work in education including TechPrep’s N.C. Outstanding Community Support Person of the Year and the Governor’s Education First Award for the Greenville-Pitt County Chamber of Commerce’s Partners in Education program. She has also been recognized by both the Onslow County and Pitt County school systems as well as Marine Corps Base Camp Lejeune for leadership and community service. She was also honored as a Woman of Distinction by the Girl Scouts of Coastal Carolina. In 2017, Susanne was presented the Lifetime Achievement Award from the Carolinas Association of Chamber of Commerce Executives, an organization of which she was a founder.

Susanne’s call to ministry was centered around leadership and speaking. In addition to her Institute teaching, she has led seminars and workshops on topics ranging from leadership to marketing. She has first entered the pulpit as a certified lay speaker for the UMC and was commencement speaker at two college graduations.

Mixing business and religion is a good thing, Susanne proclaims. “To keep my connections to the marketplace and the chamber world is a true gift as I work to build the Kingdom of God through full time ministry now. I am just grateful every day!” Susanne’s book God People Money was published in 2011 and is centered on stories of those who successfully integrate faith into the workplace.